The 19 Most Famous Last Words Of All Time 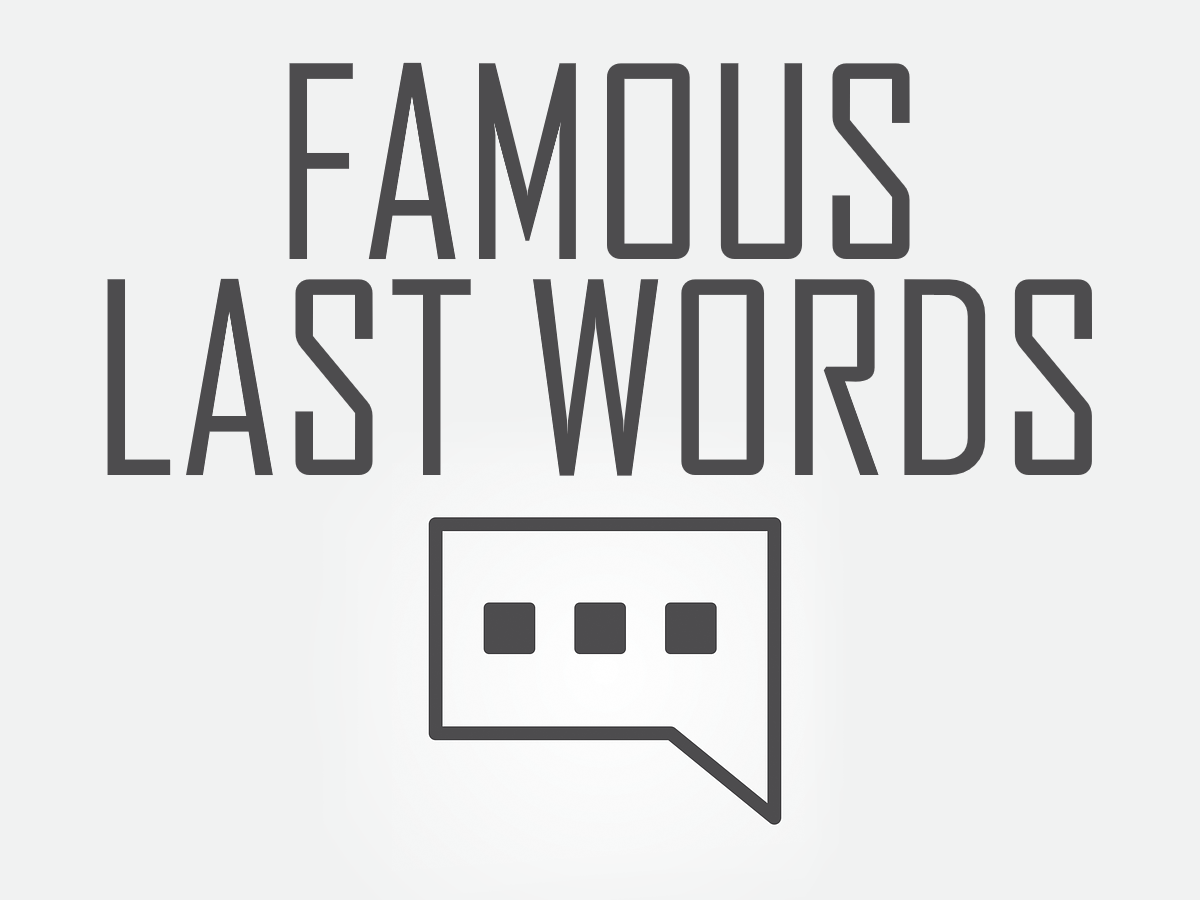 What would be the last words that would be your words if knew that it was your time to pass away?

Being in the funeral profession, I can often sympathize with the concept of death.

1. “I am about to die or I am going to die; either expression is used.”

3. “It is very beautiful over there.”

The reddit user’s great uncle flew for the Navy in WWII and flew commercial jets for almost 30 years and while in the hospital bed, he uttered these last words to his brother.

Steve Jobs’s last moments were written about in his sister’s eulogy about him, where she writes: “Even now, he had a stern, still handsome appearance, the profile of an absolutist, a romantic. His breath indicated that his path took him many miles up the mountain. He was climbing, but also, at this moment, endowed with the capacity for wonderment, the artist’s belief in the ideal, the still more beautiful later.”

In a letter written by Cassandra Austen’s sister, Jane Austen tells that “When I asked her [Jane] what she wanted, she replied, ‘I want nothing but death!’”.

Oscar Wilde passed at the Left Bank Hotel. Before his death he continued mostly positive, until the end when he compared his well-being to the wallpaper in his room that he seemed to hate. After his death, the wallpaper was taken off and the room was designed to look like one of the rooms in Oscar’s London flat where he lived.

9. “Behold, O monks, this is my advice to you. All component things in the world are unsettled. They are not lasting. Work hard to gain your own redemption.”

11. “Friends applaud, the comedy is finished.”

A user on reddit commented about the death of a patient who said that she wanted to say goodbye to the person who was unconscious. Instead of saying goodbye, she quietly spoke to the patient shortly before his death.

After letting one rip after her death, Louise decided that being a woman who can fart is perhaps definitely still kicking.

14. “Capital punishment means those without the capital get the punishment.”

He was executed right after the capital punishment became re-legalized in Florida in 1979. He spent his final days writing these last words on a pieces of mail.

16. “I should have never switched from Scotch to Martinis.”

When a priest said, “I’m sure you want to talk to me” to Wilson Mizner while he was dying, he responded with those last few words.

Richard B. Mellon and his brother played a game of tag that has lasted over seven decades. On his deathbed, Richard’s last words were, “These are my last words.” His brother, who never failed to warmly respond to his words, actually died four years later..

How to choose the right funeral service provider in Miami Florida
Preparing for the Inevitable
How to Age well with grace
Studies on elderly and social isolation
Writing a Meaningful Eulogy
What to Wear to a Funeral
Questions We Ask Ourselves When We Cannot Get Over a Loss
Cremation vs Burial – Which Is Best for You?
How To Choose A Funeral Home
Top 10 Characteristics to Look for in a Funeral Home
The first holiday without a loved one: coping with grief and loss
What is Advance Funeral Planning?
How to talk to your children about the death of a loved one
The 19 Most Famous Last Words Of All Time
25 Of The Most Amazing Funeral Songs Of All Time To Add To Your Playlist
Grief Care Package Guide
How to plan a celebration of life
8 Things You Can Do With Cremation Ashes
Keeping a Loved One’s Cremains at Home? 11 Options
Top 10 Wonderful Ways to Remember a Loved One
5 reasons how Funeral Pre-planning Prepare Us Emotionally!
Why Do We Have Funerals?
What Can I Do if I Can’t Afford a Funeral?
Funeral Etiquette Viewing & Visitation Tips
What documents need to keep after someone dies?
Is It Necessary to Embalm a Body
Top 10 Best and Top 10 Worst Things to Say Someone in Grief
Wake vs. Viewing vs. Funeral: What's the Difference?
How Can Yoga Help You Heal Emotionally?
21 Unique Funeral Personalization Ideas